Growing up I was always a rather serious child. I didn’t like other children and preferred to be with “the big ones”. I used to play a lot on my own and liked to read and write (even when I was not able yet) and listen to the songs and the words of the adults. I was quiet and basically serene, often happy. But I clearly remember the feeling of observing life without really understanding what was going on and, above all, I could not understand the reason why I was there, with the people I had learned to call “my family”.
Mother, father, grandmother, grandfather, uncles and aunts, then cousins, then mum’s second husband, then dad’s second wife, then sisters and brothers on both sides. I looked at everything and everyone from a distance, with the profound certainty of not really belonging to anything or anyone.

At the age of six, because of a change of house and the beginning of school, I made my first friends and life began to be much more intense and wild. I started to appreciate the company of other children and I realized that it was also much easier than I could have imagined.

I remember the long and hot Piedmont summers spent in the shade of the backyard or under the fierce sun of endless meadows and fields, along with a tribe of peers with whom I melted to disappear and then find myself at home full of dirt and scratches, grass stains and indelible flowers in my heart.

But I never lost my “seriousness”, my ability to observe with a certain ruthless detachment and the feeling of not belonging.

I had only learned to handle myself better in life, with greater confidence in myself and in my judgment. And to enjoy the gift of the senses and the body. So, when as an adult I approached meditation and Osho Therapy and I had to begin to relate to my “inner child”, it was a very special journey. Mine was not a story of repression of vitality and impulses, as sometimes happens, rather the effort and discomfort of adapting to a reality in which I was not seeing myself reflected. The funny thing was noticing that my inner child was much more serious than I was as an adult. And it was difficult to fully understand how I got from A to B!

I went through the whole Primal crying and despairing, perhaps for the first time feeling and fully expressing the sense of unease I was experiencing at that time.

The exit from Primal coincided with the end – not my choice – of an long and important relationship. That forced me to be more adult than ever and to face changes with strength and determination.

Sometimes I remember feeling a little guilty towards my “inner child” for this. I wanted to give her a moment of relaxed and childish joy, but life didn’t allow me and I had to be “serious” and decisive like never before.

It was during that time that I resolved to change continent and move to India forever, or at least in the long term. Sweet and happy years followed, in the shade of Osho and the fierce sun of the endless Indian summer and of my desire to live.

My mother’s death, many years later, confronted me again with my “inner child”. Tears that never seemed to run out. The dismay of having lost the fundamental root that had brought me into this world and the feeling that even a part of me had died with her.

So it was then that I decided to enroll in the Freedom Process, which was held and is held, exclusively, in Pune, where I lived.

It was a long journey. First I had to fill in and send a long questionnaire, then I had to go through the preparation interviews, then, months later, the time of the actual group finally came.

The Freedom Process is a process of which almost nothing can be revealed, because it would compromise the experience of those who have yet to do the process.

So I won’t go into the details of what happened there.

But as far as my personal experience is concerned and what it has represented in my personal growth, I can say that it is in the Freedom Process that I truly and finally met and understood in depth who was that “me as a child”. A being who was as wise as innocent, full of almost extraterrestrial love and compassion compared to the mediocrity that surrounded her. And it was not so much the family as such, that, in fact, had provided her with a stimulating and relatively free environment, albeit in an indubitable and Sicilian emotionality without half measures. Instead it was the surrounding culture. Piedmont catholicism, provincial bigotry, suburban ignorance and the intrinsic sadness of a culture regionally voted to be demure and, as the saying goes, “false and polite”.

And the list certainly does not end here… What I mean is that, when speaking of “inner child”, not everything is always to be attributed to the parents, or to the significant adults with whom we come into actual contact. There is a deeper and broader level of inquiry and in this sense the Freedom Process is truly a 360-degree exploration of all that has influenced our lives, both in a negative and in a positive way. The Freedom Process is not a process in itself painful and emotional, like the Primal, but a journey of deep and honest awareness, which provides us with powerful and indispensable tools to fully understand our essence and our personality and live them both with a sense of integrity and dignity.

“A deepening of your meditation, from dependency to freedom, living your truth.
BELA

Many of us are obsessed with the thought of having to heal, change, transform ourselves, as if it was a direct consequence of our “doing”. It is true that without doing anything you do not go very far, but it is also true that life becomes really pleasant when we are finally able to be at peace with ourselves not because we are healed, changed, transformed, but because we have learned to relax in what is inside and outside of us: the shadow and the light, the faults and the values, the lack and the gift. So, if you feel or think that something is still missing in your spiritual history, that you are ready for that extra step that will lead you to fly high, consider going to Pune February 4-15 for the Freedom Process.

As I mentioned before, it is not enough to register online, but you must follow a procedure that lasts a few months or weeks. Yes, you are still in time…

All information (in English) on: www.livingtruthnow.com

Bela has been facilitating the Freedom Process for about 6 years.

Her unwavering passion for Primal therapy and other early childhood deconditioning work encouraged her to share her experience and wisdom
in this field since 1996.
Bela lives and works most of the time at OSHO International Meditation Resort and travels around the world to share her work, at the same time satisfying her incessant curiosity to understand how the conditioning colors human behavior.
Her professional approach, as well as formally qualified, is based on her growth and meditation process. The courses and sessions she facilitates are known for the depth and clarity in which people can feel free to be as they really are. The core of Bela’s work is to support the essence of the person in a safe and accepting environment, rather than focusing on the issues; a holistic approach thanks to which everyday life will be more connected with one’s potential and intuition, in the confidence that only the individual knows the answers to his questions. 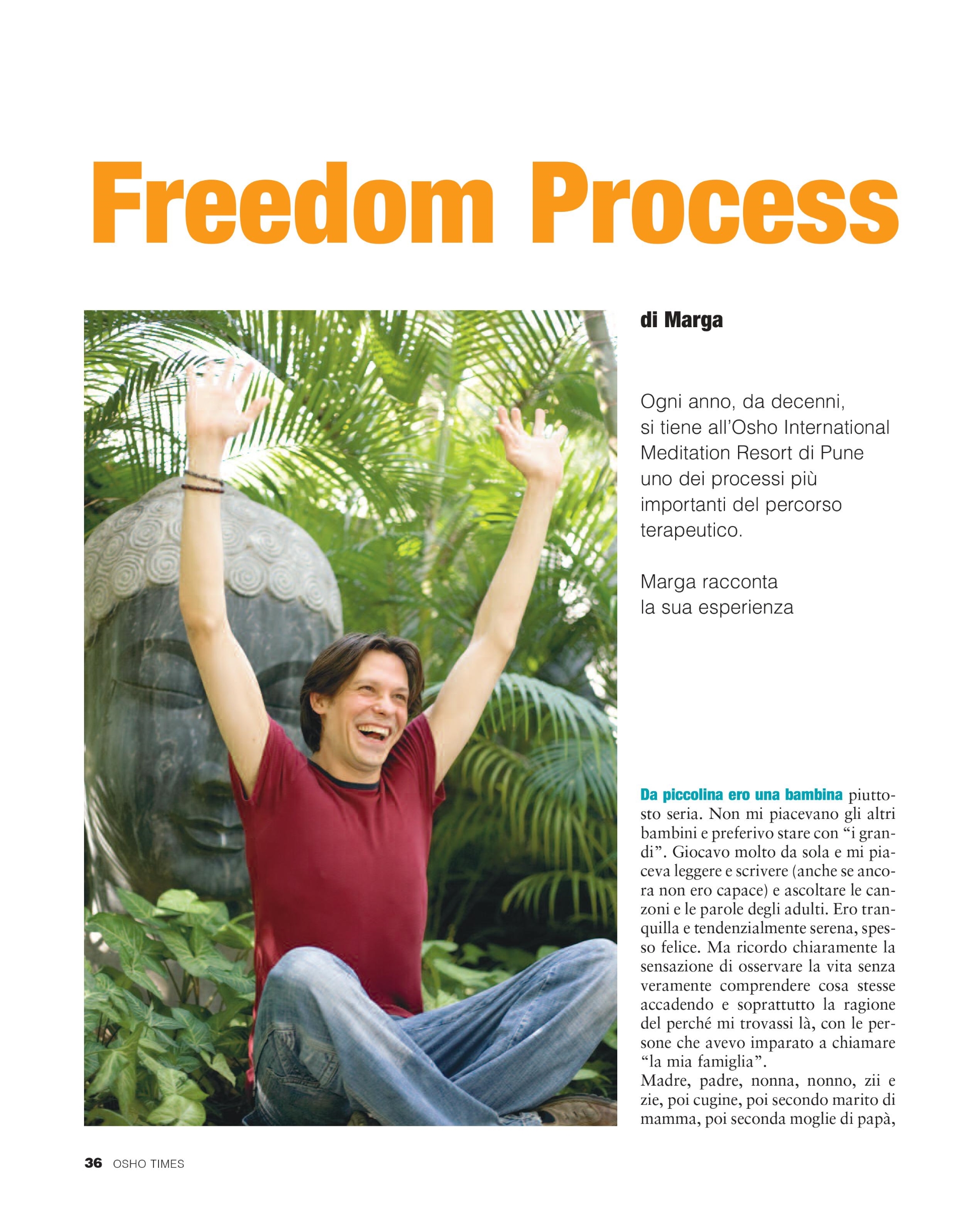 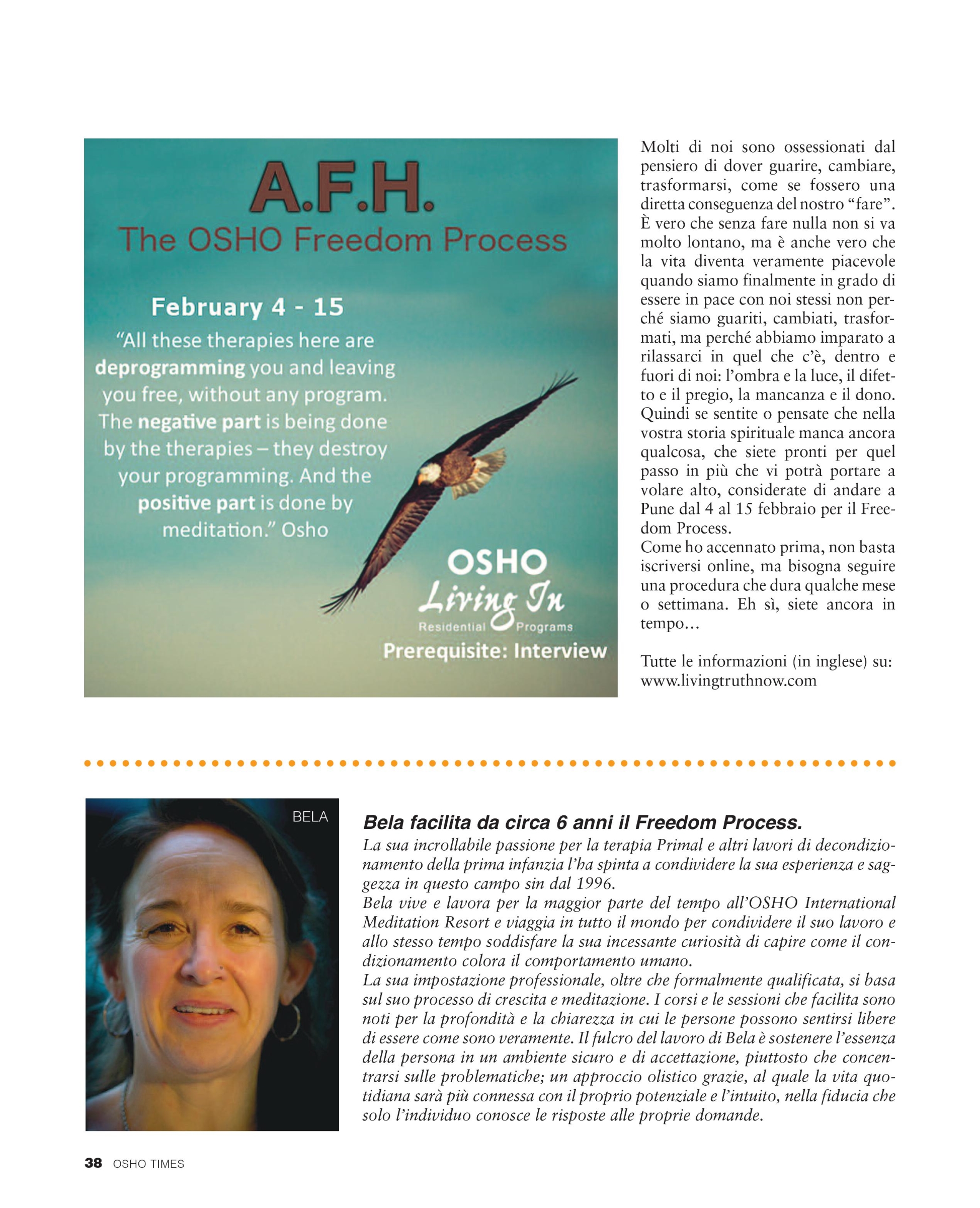