Many times in my work people come and say: “I want to change”. Mainly the first thing they notice is that they are not happy with their work, or they are not happy with their life so they think they need to change something on the outside. And when I ask them what it is that they really would like to change, and if they really want to change, sometimes they find it quite challenging.
And when they get supported in their idea of an outward change, they are very happy, they think that their problem will be solved. However, often it is something inside ourselves that needs to change; it is more of an inner attitude, an experience from the inside.
And this is also my own experience. Some years ago I noticed that I was coming here to Pune every year, meeting my friends again, getting back to my work, and I was very happy with that. But I started to wonder: “Is that it? Yes, there is lot of fun and enjoyment, but is there anything more that I could do?”.
And then I was offered another job, and I said yes. This is how I started my scheduling work at the Multiversity, which I wasn’t really prepared for… Sometimes here it happens – as in any other job – that it is not all about fun; sometimes you get many challenges, such as working in a team, or working with people who are very different from each other.
And then one day I was at an Evening Meeting and I decided that, from then on, I would say yes to whatever might come, whether I liked it or not… I decided to give my total yes to everything.

And it turned out to be the biggest learning experience in my life!

It is about being in the moment all the time: for instance, in my work, when the shop opens at nine o’clock it doesn’t happen that people come all together at that time, then they go off somewhere, and I can do my administration work, not at all! I’m at the desk and everything happens all at once! And while I’m there, change happens all the time because each moment you need to take a decision about what needs to be done. Saying yes for me has meant being open in a context where change happens constantly, where you are not able to plan or prepare in advance. In fact, those times I go to work with an idea of doing things in a certain way, it never happens!
So the real change for me was meeting the challenge of being in the moment while facing what comes from the outside; and say yes to that. Doing so opens a tremendous possibility of enjoying things, instead of feeling stuck or bored.

There is a shift inside: it is not so much about the longing for the change, and the satisfaction that I can get out of that change. It is much more available to me because it is inside me, I don’t have to act or do something on the outside. And if I can say yes to every moment, there is never a boring moment; there is always something new, even in the same things that I do every day.
If I am the one who is saying yes, I no longer get the feeling – as I used to – of being stuck, or of doing what I am told by someone else. Discovering this a while ago, somehow, allowed me to access my power because in saying yes I realized that my life is in my hands. I discovered that I was the one who was saying yes; it was coming out of my abundance, out of my overflow. And once that starts happening you get many rewards and a great satisfaction all the time.

In saying yes I also noticed that slowly I was getting a yes also from the outside, and with that more happiness arose. I noticed that people were receiving me more easily. For example, if I was dealing with a person with whom it was not so easy to communicate, or to work with, in saying yes to that person it was as if something changed in that person too. Seeing that, thanks to a simple word, the whole dynamic of things shifts, was for me the biggest insight I had around change.
And I also noticed that you get more fun out of things. Often the need for change comes out of the feeling that we have enough of the same things, day in day out. However, if we say yes we also let go of the belief that we have any sort of control over things. And when that happens there are many surprises in store for us!
If we spend our life fighting against things we certainly don’t improve the quality of our life; in fact, we compromise it! And our vision becomes narrower and narrower.

Surely this is easier to do here than anywhere else in the world. This is a place where people have the opportunity to expand their vision and understanding. And this process is supported by Osho’s meditations and discourses. So it may happen that all of a sudden people come in contact with something new which they hadn’t heard of before.
And nobody here tells people that they have to change, that something is wrong with them. In fact, the opposite is true: all is fine the way it is. Feeling this, people get a sense of relaxation and then they can face their situation more easily, asking this question: “What would make me happy?”.
The beauty of this place is that, first of all, people are invited to accept whatever is there. Then if they wish to change they may get support in that. The emphasis is on bringing out people’s true nature, on removing what is hindering or hiding it. This is what lays the foundations for the real change to happen.
Here you can meet a wide variety of people, nationalities, cultures, therefore a wide range of ideas, understandings, conditionings, and that allows you to get out of the known, of the familiar. Then by hearing and seeing other people’s stories you realize that the grass is not greener on the other side; but many actually think so, they believe that obtaining material things will bring them the happiness they are looking for.
Here you meet all kinds of people: poor people, rich people, even movie stars, and you get a chance to see that happiness is not necessarily based on wealth, fame or success. Everybody here can get to the same understanding: it is about changing your attitude inside. If you are able to say yes to who you are, it’s as if the light switches on in your life!
Some people get it through creativity, some people get it through solving childhood issues, some people get it through bodywork. And some people prefer to be in silence, without interacting with others.

There is also something interesting about the ability to say yes… I myself had to go through a time where I allowed myself to say no to certain things, to certain situations. Here at the Multiversity I had the opportunity to explore my ‘no’. Through a similar experience people can realize that sometimes their no is towards something specific, not towards everything. Understanding this brings you expansion, relaxation, and eventually takes you to the next step: “What can I do differently in my life in order to move more towards a yes?”.
I have been working on this for a few years now: “What does it mean to say yes?”. And I have seen that, in the end, the real yes is towards ourselves. And sometimes saying yes to ourselves means saying no to something.
Also the idea that if we say yes we become like slaves, or we won’t be able to do what we want to, is not really true. But here comes an important step about change: we need to accept the consequences that change brings. Often people say they want to change but that doesn’t mean that they are actually willing to take responsibility for what change involves, and take the necessary steps to make it happen. This may mean that to do what they want to, they may have to do more, or give up something. Sometimes changing means letting go of something which is familiar to us, our comfort-zone. But often people choose to stay stuck in a situation even if they could change it because they are not willing to take responsibility for the change. This happens because, even if we don’t like it, our situation is, after all, something familiar to us. Osho talks about it by calling it something like: “Your known misery”. And people sometimes don’t want to let go of it! They would rather stay with their known misery than change their situation.

I think that some of the therapeutic processes here give a real support to change, but to keep the new in place something else is needed, and that is meditation, the ability to watch. I see it in myself, and I see it in others too: sometimes I fall back into old patterns which belong to a time when I didn’t have the insights that I have now. The one thing I can do is create the space of meditation which will then facilitate the change: “Can I adapt to what is here now? Can I be open? Can I say yes?”. In my experience it’s about saying yes to whatever is there.

But there is also something which is not in my hands, which is bigger than me, which sometimes moves me in a direction that I cannot bring back to my personal will. I am not sure whether the sort of blueprint that we bring with us into the world can be changed or not, yet I believe that somehow we come to this world with a certain setting, with a blueprint…
Osho says that we can do it up to a certain point, that if we really want to change we need to access an inner dimension; then the journey turns inward, towards a space of watchfulness.
And there comes a point when you start laughing at all the things that you went through to change, when actually all you needed to do was sit silently and create that space inside yourself!
That is the only change needed. A lot of people go through an enormous amount of work on themselves just to realize, at some point, that the answer was much simpler and available to them than having to go through all the effort to change.
In my opinion it also helps to feel at ease with who we really are. I heard Osho say: “You are fine the way you are. Existence didn’t make any mistake”. And this is really true: each one of us come to this world with their own uniqueness; there isn’t one person like another one; however different we are, we all have the possibility to sit silently and access that space of expansion where we can come to know a different reality. To me the real change lies in that ability. 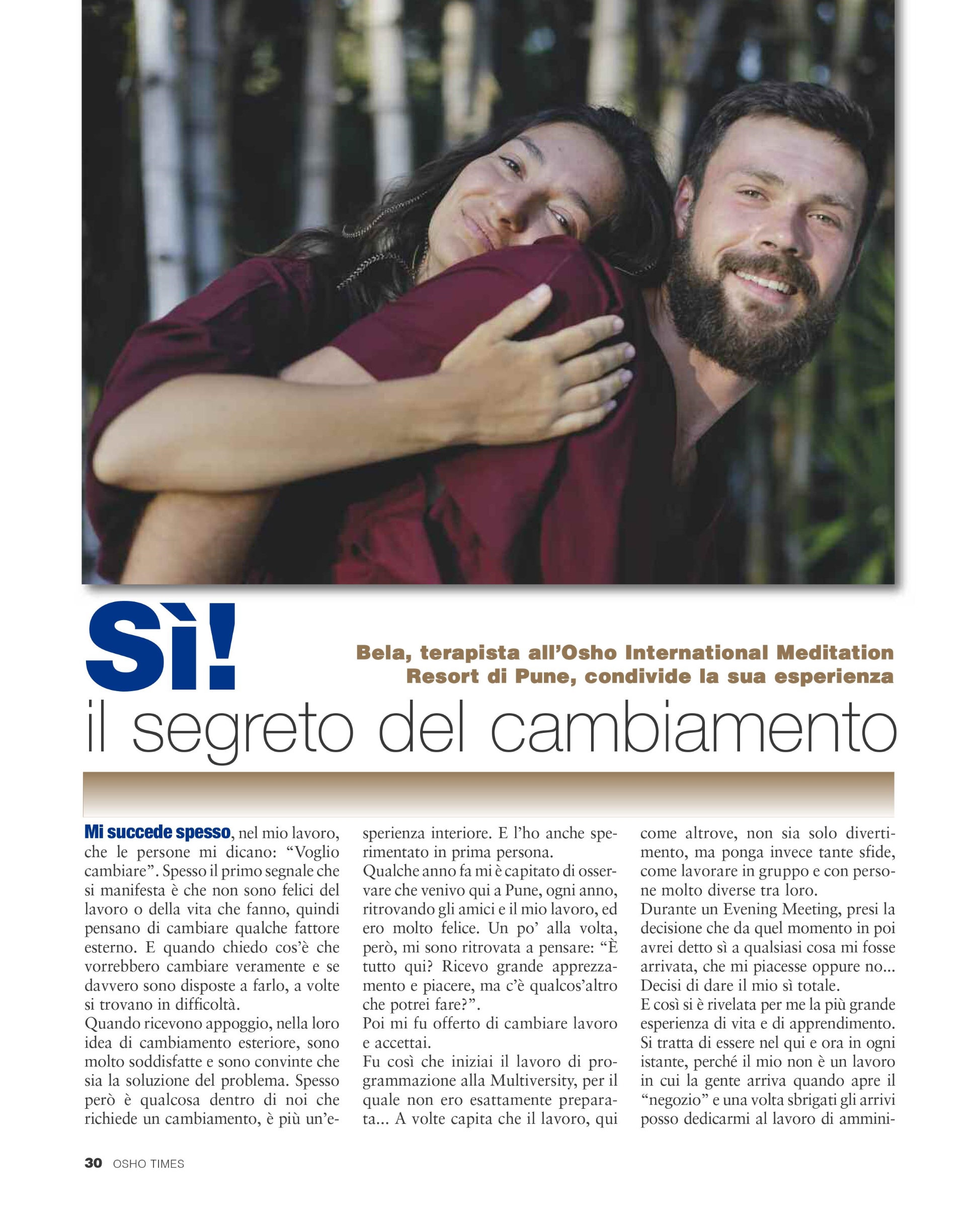 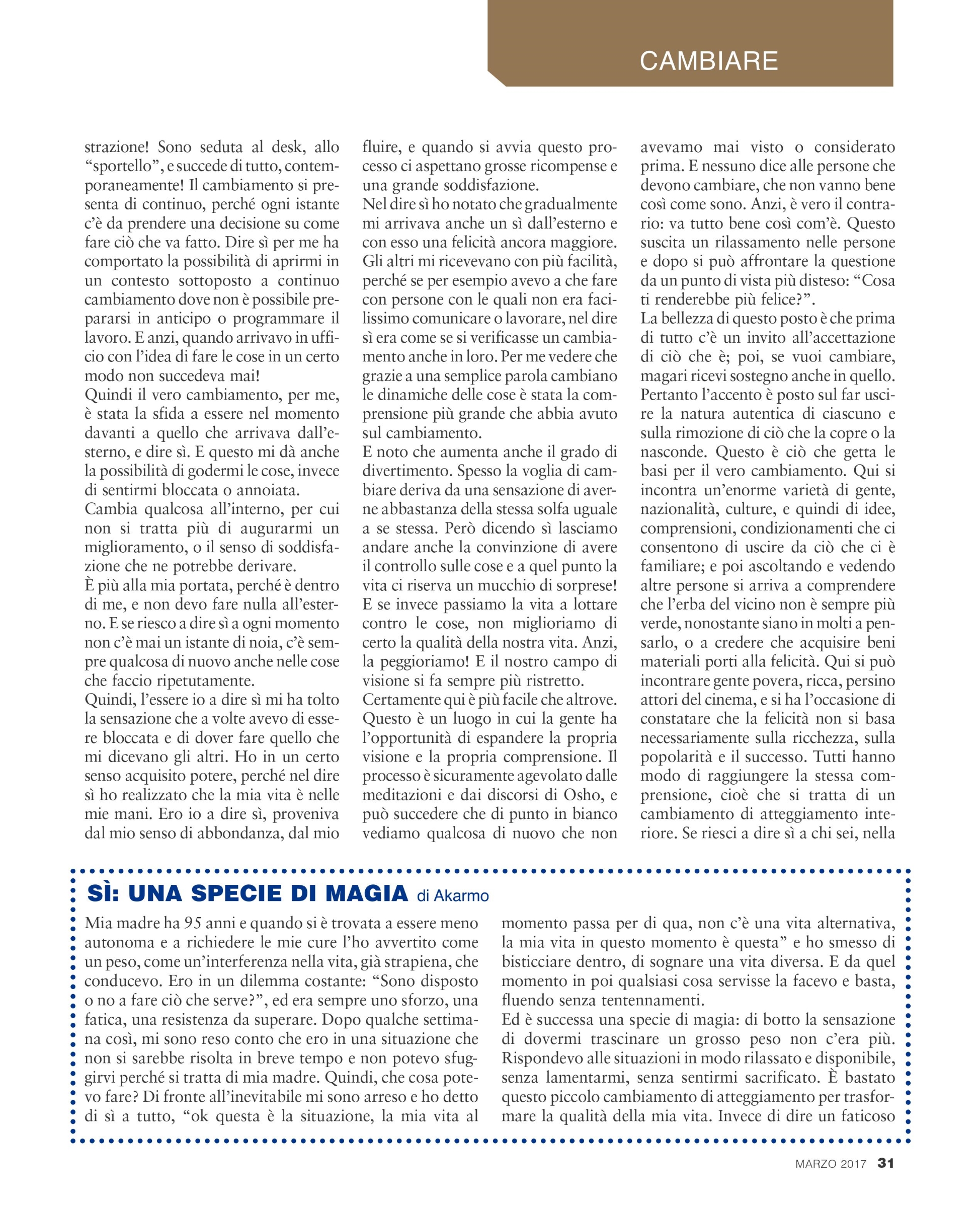 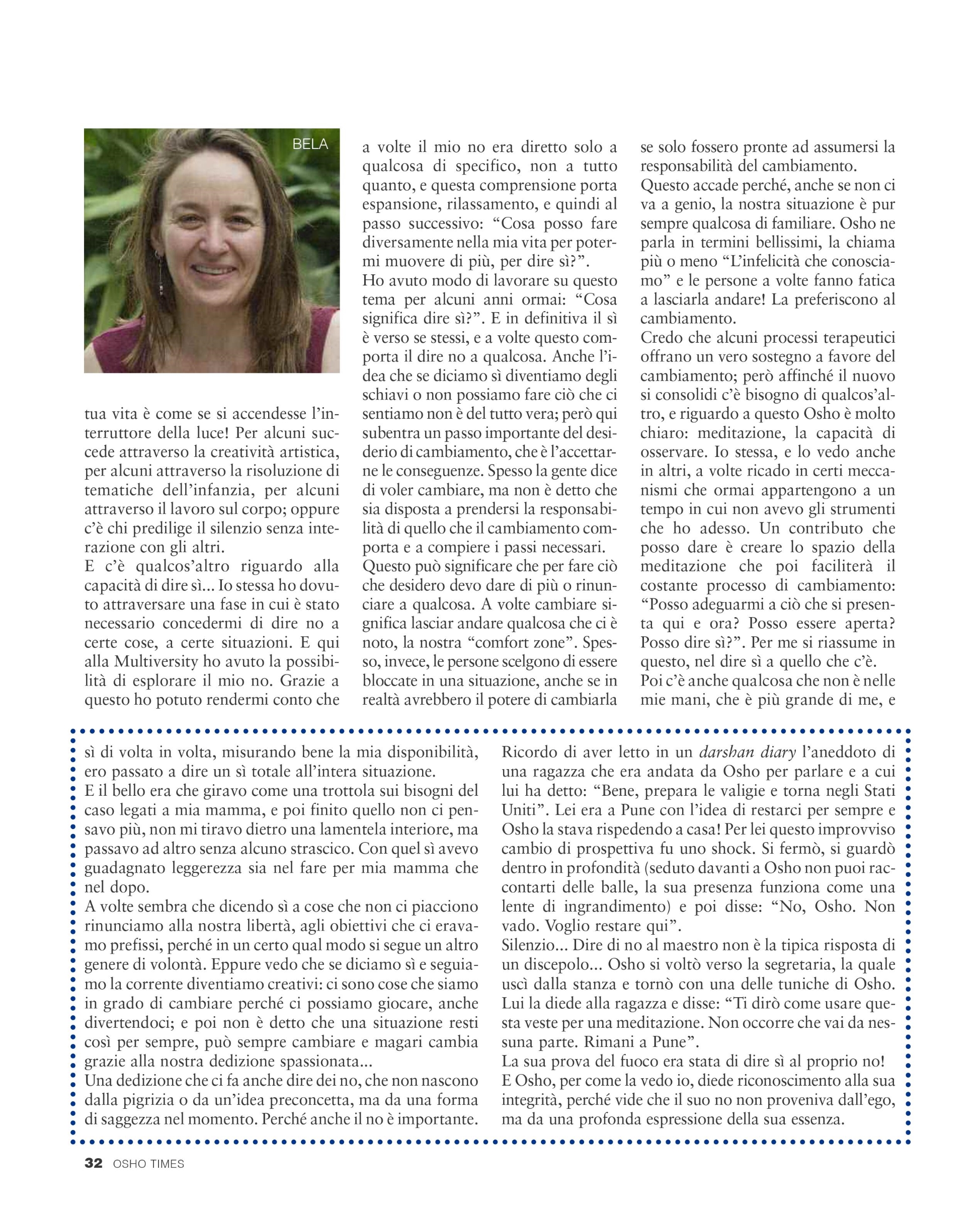 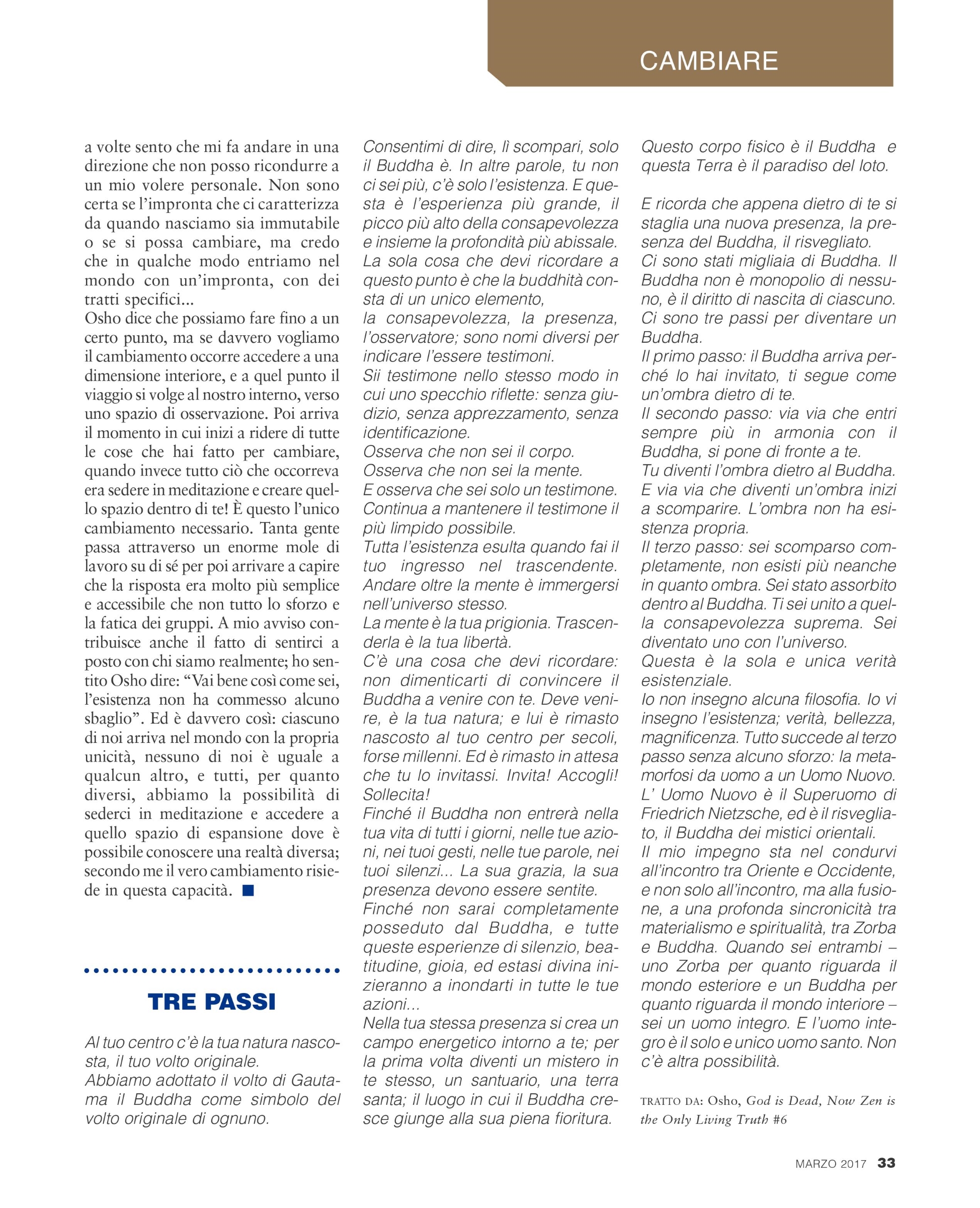